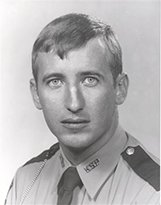 Trooper William F. Pickard, age 26, was fatally shot while attempting to serve an arrest warrant in LaRue County. Trooper Pickard had accompanied two Hodgenville police officers to the home of the suspect, who had been charged with assault and wanton menacing. As Trooper Pickard approached the front door, the door flew open and a shotgun blast was fired, striking the trooper fatally. Trooper Pickard was assigned to Post 4 Elizabethtown and had served with the Kentucky State Police for four years. He was survived by his wife and 13-month-old son. Trooper Pickard is buried at Red Hill Cemetery in Hodgenville, Ky. In honor of his service and sacrifice, a five-mile stretch of KY 61 in LaRue County has been designated the Trooper William F. Pickard Memorial Highway.