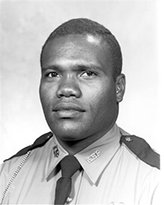 Trooper Clinton E. Cunningham, age 29, died Feb. 11, 1979, after being ambushed in Franklin County. He was shot in the back while investigating a false report of a break-in at a store on US 127 north of Frankfort. The perpetrator was caught and prosecuted. Trooper Cunningham was assigned to Post 12 Frankfort and had served with the Kentucky State Police for three years. He is buried at Memorial Gardens in Richmond, Ky. In honor of his service and sacrifice, KY 1986 in Madison County has been designated the Trooper Clinton Cunningham Memorial Highway.