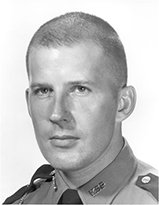 Trooper Delano G. Powell, age 28, was fatally shot July 8, 1965, while serving a warrant in Breathitt County. Trooper Powell had accompanied a sheriff's deputy to the residence of the suspect, who opened fire with a shotgun from the cover of his darkened porch. The deputy pulled Trooper Powell to cover, but he died en route to the hospital. The suspect was later apprehended and convicted. Trooper Powell was assigned to Post 13 Hazard and had served with the Kentucky State Police for a year and a half. He was survived by his wife and his three-year-old son and is buried in Sulphur, Ky. in Henry County, Ky. In honor of his service and sacrifice, US 42 in Henry County has been designated the Trooper Delano G. Powell Memorial Highway.

*This workout is designed to be an all-out sprint. The thrusters are done with an empty barbell.