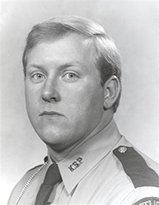 Trooper Edward R. Harris, age 29, was fatally shot Nov. 7, 1979, during the course of a traffic violation stop. According to a witness, Trooper Harris was struck first by a shot fired from inside the suspect's vehicle and again as he lay in the road. Trooper Harris was assigned to Post 4 Elizabethtown and had served with the Kentucky State Police for six and a half years. He was survived by his wife and three young children. He is buried at Red Hill Cemetery in Hodgenville, Ky. In honor of his service and sacrifice, KY 3005 in Hardin County has been designated the Trooper Edward Harris Memorial Highway.