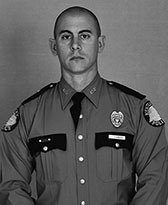 Trooper Joseph 'Cameron' Ponder, age 31, was fatally shot on September 13, 2015 while conducting a routine traffic stop on Interstate 24 in Lyon County. Upon receiving his commission as a Trooper, he was assigned to Post 1, Mayfield, where his death came only nine months into his career. Trooper Ponder is buried at Kentucky Veteran's Cemetery in Ft. Knox, Ky. Interstate 24 in Lyon County, from the Caldwell County line to its intersection with Kentucky Route 293, is designated as the Trooper Joseph Cameron Ponder Memorial Highway.