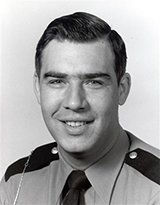 Trooper Mack E. Brady, age 40, died Nov. 9, 1966, in a vehicle crash in Henderson County while responding to a call for assistance in a domestic dispute. When Trooper Brady swerved to avoid a car that pulled into his path, his car ran off the road, struck a bridge abutment and exploded. Brady was trapped inside. Trooper Brady was assigned to Post 16 Henderson and had served with the Kentucky State Police for 17 years. He was survived by his wife, a daughter and a son, who recently retired from his career as a Kentucky State Police trooper. Trooper Mack Brady is buried at Fairmont Cemetery in Henderson County, Ky. In honor of his service and sacrifice, the KY 425 bypass in Henderson County has been designated the Trooper Mack E. Brady Memorial Highway.